What is Globe Valve?

Globe valves are linear motion closing-down valves having a closure part that is turned squarely on and off the seat. The opening of the seat is directly proportional to the disc travel. This balanced connection between valve opening and disc travel is perfectly designed for tasks including regulation of flow rate. Globe valves are the best choice for throttling and monitoring fluid flow and are usually used in small-sized piping.

The design of the globe valve demands two changes in the direction of fluid flow, which induces resistance in liquid lines and sufficient pressure drop. The installation of globe valves is done so that the flow is up through the seat ring and against the disc’s bottom. This can save the disc from the accumulation of dirt and debris.

What are globe valves used for? Globe valves can be used in operations that include fluid handling. It is mainly designed to regulate fluid flow, but it can be used as a block or isolation valve. Moreover, globe valves have short stem travel, easy fixing, and minor damage compared to gate valves.

The primary function of the globe valve is to control, start and stop the flow. A spherical-shaped globe valve consists of a movable disk and stationary ring seat. The seat is parallelly positioned in the middle of the pipe, and its opening is closed off with the disk. A valve stem raises and lowers the disk when the handle is turned, either manually or through an actuator. The flow rate of fluid is maximum when the disc is raised entirely, and the fluid flow ceased when the disc is completely lowered. Fluid flow can be regulated by partially raising the disc; the more vertical travel of the disc, more will be the fluid rate.

The body makes the mass of the valve and can be identified easily. It is the major part of a valve where pressure is stored. All the internal parts of the valve which come in contact with the fluid regulated reside in the body. The bonnet is attached to the body and used to retain the fluid, slurry, or gas that is going to be controlled by the valve.

Plugs are the closure unit of the valve attached to the stem, which is screwed up or down to restrain the flow. Generally, they are of the balanced or unbalanced kind. Unbalanced plugs are wielded with smaller valves or with low-pressure drops across the valve because they are solid. The benefits of unbalanced plugs are a simple design, there is just one potential leak passage at the seat, and usually, they cost very low. The major drawbacks are their limited size, and with a large unbalanced plug, the forces required to seat and maintain the flow often become unattainable. Balanced plugs contain holes through the plug. The benefits of a balanced plug involve easy shutoff because it does not have static forces to overcome. A second leak passage may appear between the plug and the cage, and the cost usually is higher.

The stem is the part that transfers the actuation force and connects the actuator with the inside of the valve. Smooth stems are used for valves controlled by the actuator, while threaded stems are used for manual valves. To avoid any leakage of materials, smooth stems are enclosed by some packing material. The packing material used is a wearing material, and it should be replaced during maintenance. The edges of a smooth stem are threaded that enables connection to the plug and the actuator. The stem must be capable of tolerating a large fraction of compression force during valve closure.

Moreover, it should have massive tensile strength during valve opening. Besides this, the stem should be straight, or it must have low run-out in order to guarantee good valve closure. The low run out of stem also lessens the packing’s damage enclosed in the bonnet, which forms a seal against leakage. The stem should be provided with a covering over the packing nut to protect the packing material from foreign particles’ invasion, which would stimulate wear.

The seat ring delivers a safe, stable, and replaceable switch-off surface. Seat are mostly fastened in or torqued. Due to this, the cage is pushed down on the lip of the seat and hold tightly to the valve’s body. The seat can be threaded and fastened into a thread cut in the exact area of the body. But this technique makes it very difficult or nearly impossible to remove the seat ring during maintenance. Seat rings are usually angled at the seating surface to enable guidance during the last stages of shutting the valve.

Reasonable globe valves or stop valves that are used in plumbing, having an identical mechanism, mostly have a rubber washer at the bottom of the disc for the seating surface, so that rubber can be pressed against the seat to create a leak-tight seal when closed.

Bonnets are yet another essential part of the globe-type valves. The maintenance personnel can have access to the valve’s inner system by disassembling the bonnet, and they can repair or replace valve parts like the seat, the stem, etc. (trim).

The bonnet gives a sealed finish to the valve body. The threaded segment of the stem runs through a void with matching threads in the bonnet. A screw-in, union or bolted bonnet can be used in the globe valve. The simplest bonnet is a Screw-in bonnet; it offers a durable and pressure-tight seal. While for the applications which need regular maintenance or cleaning, union bonnets are the best option. It also provides extra strength to the body. A bonnet affixed with bolts is used for high-level and high-pressure tasks. Packing with a wearable material is done to protects the seal between the bonnet and the steam during valves. 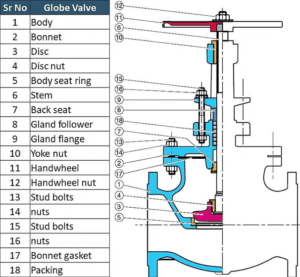 Other parts include nuts, body seat ring, packing, gland flange, and so on.

In the angle globe valve edges are at a 90° angle that allows the fluid to flow in just a single turn of 90°. This valve has applications in systems with intervals of pulsating flow because these valves can deal with “the slugging effect”, which exists naturally with a pulsating flow.

The high-pressure drop issue associated with Z-type valves is figured out by this Y-shaped globe valve. In these valves, the seat and stem are mounted at nearly 45° to the pipe axis. Y-body valves have services in high pressure and other vital tasks where pressure drop is an issue.

Z-type globe valves are the most common type with a straightforward design. The globular body in the Z shape partitions contains the seat. The seat’s horizontal seating formation enables the stem and disk to travel perpendicularly to the pipe axis that results in a very high-pressure loss.

The valve seat can be accessed easily by dismantling the bonnet, connected to a wide opening at the top of the valve body. Just like a gate valve stem passes through the bonnet.

The manufacturing, installation, and repairing of this design is relatively easy. This type of valve has applications in the process where pressure drop is not a concern, and throttling is desired.

A needle globe valve is a valve with a small diameter. In instruments used to measure pipeline systems, these valves act as opening and closing and flow control.

The pressure seal bonnet globe valves are broadly used for high-pressure and high-temperature applications. The gasket force in pressure (seal valve) will be more prominent with higher body cavity pressure.

Globe valves are unidirectional, which means that these valves are constructed to bring the flow in only one direction, under the disc. On the valve body, there is an arrow of direction that is embossed, but the direction can easily be observed by looking into one end of the valve and see if you are looking at the lower or upper side of the seat. It is suggested that the valve should be positioned vertically only, whereby the handwheel operation will be at the top of the valve to confirms that no unexpected decay or damage will occur to the valve. The critical points of installation are discussed below:

Timely maintenance and inspection of the globe valve can guarantee the long operational life of your valve. There are some points you should remember: